In DEEP ROUGH, one man faces challenges as a pastor in China. His son has become a breakout phenom in the world of professional golf. The Chinese government is displeased with both, and their lives are in danger. Stephen Grant – a onetime Navy SEAL, former CIA operative and current pastor – has a history with the communist Chinese, while also claiming a pretty solid golf game. His unique experience and skills unexpectedly put him alongside old friends; at some of golf’s biggest tournaments as a caddy and bodyguard; and in the middle of an international struggle over Christian persecution, a mission of revenge, and a battle between good and evil. The book has received high praise, including… 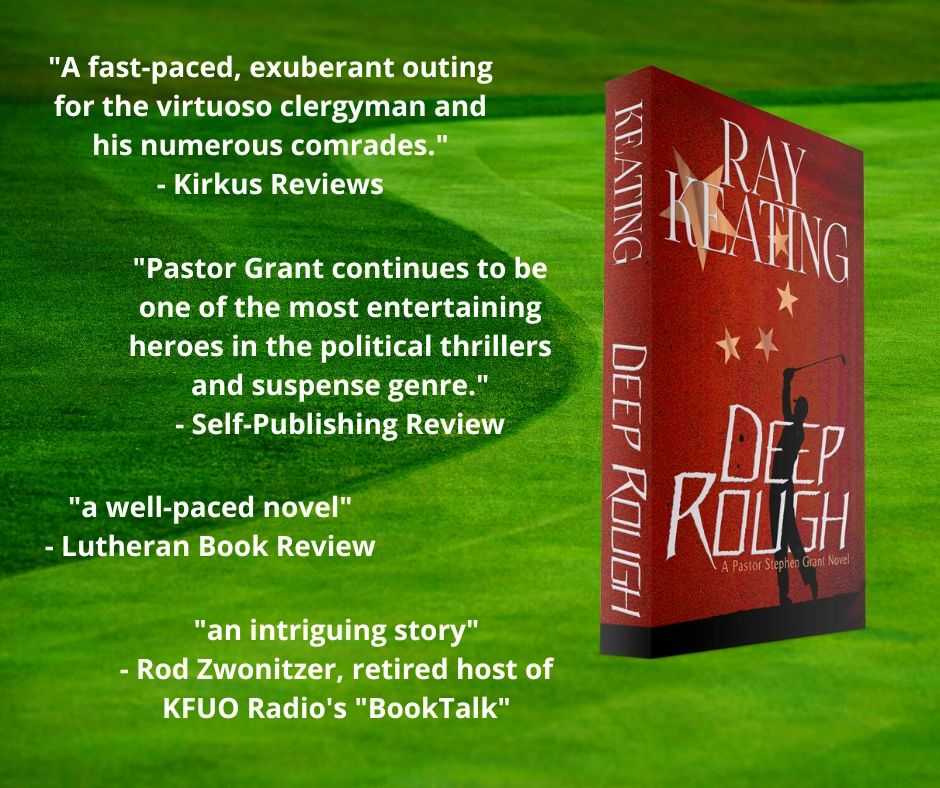 "... when the action does hit, it's exhilarating, and Stephen proves once again he's as capable in fights as he is in quieter times of prayer and worship. A fast-paced, exuberant outing for the virtuoso clergyman and his numerous comrades."  - Kirkus Reviews

"Pastor Grant continues to be one of the most entertaining heroes in the political thrillers and suspense genre. With occasional pop-ins from fan-favorite recurring characters, Deep Rough fits in perfectly with the rest of the series - quirky, tightly woven, and difficult to put down. Keating manages to keep his writing fresh and surprising with every new Pastor Grant book. This series satisfies yet again, finding unique ways to entertain and enlighten along the way."  - Self-Publishing Review

"Keating's latest Pastor Stephen Grant Series offering is fittingly titled: Deep Rough. Displaying his adeptness at developing existing and new characters, he weaves an intriguing story around a Chinese golfer on the PGA Tour and his father who is a Christian pastor in China. This unfolds with scenarios involving both governments, the FBI, the CIA, and POTUS... The plot thickens and turns and ebbs in many directions, keeping the reader engaged till the very end... Only thing left to say: will this Pastor Stephen Grant series end? Hope not, but if it does, hope Keating takes off in new novel direction, which he has become so masterful at. Read it. Gift it. Share it."  - Rod Zwonitzer, retired host of KFUO Radio's "BookTalk"

"It's kind of a cool book. If you like Tom Clancy, if you like action, if you like some nail-biting stuff, this is it."  - Rev. Kenn Blanchard, "Black Man with a Gun" Podcast

"Deep Rough is a well-paced novel, prescient in its inclusion of China (before COVID-19), with a plot borrowed from tomorrow's headlines, and real-world encouragement to speak up and act for the persecuted Church."  - Lutheran Book Review

"Keating is a clear master at his craft, and Deep Rough is proof he's mastered the game."  - TopShelf Reviews, ★★★★★

"I read all the Pastor Stephen Grant books, but I do have my favorites. Deep Rough is joining  Murderer's Row and Lionhearts among them. I'm not sure what it is. I'm not a sporty person, but Ray Keating really has a way of showing love for a game. Maybe it's the attention to details and the depth of research into it. Maybe I'm soothed by sports jargon--who knows?!--but I really, really liked Deep Rough and how the game of golf was almost a character or force in its own right... I always do enjoy the Christian elements as Keating presents them. Again, one of my favorites."  - Mary J. Moerbe, Write, Meet & Salutary blog