HEROES AND VILLAINS: A PASTOR STEPHEN GRANT SHORT STORY - Signed by the Author.

As a onetime Navy SEAL, a former CIA operative and a pastor, many people call Stephen Grant a hero. At various times defending the Christian Church and the United States over the years, he has journeyed across the nation and around the world. But now Grant finds himself in an entirely unfamiliar setting – a comic book, science fiction and fantasy convention. But he still joins forces with a unique set of heroes in an attempt to foil a villainous plot against one of the all-time great comic book writers and artists. 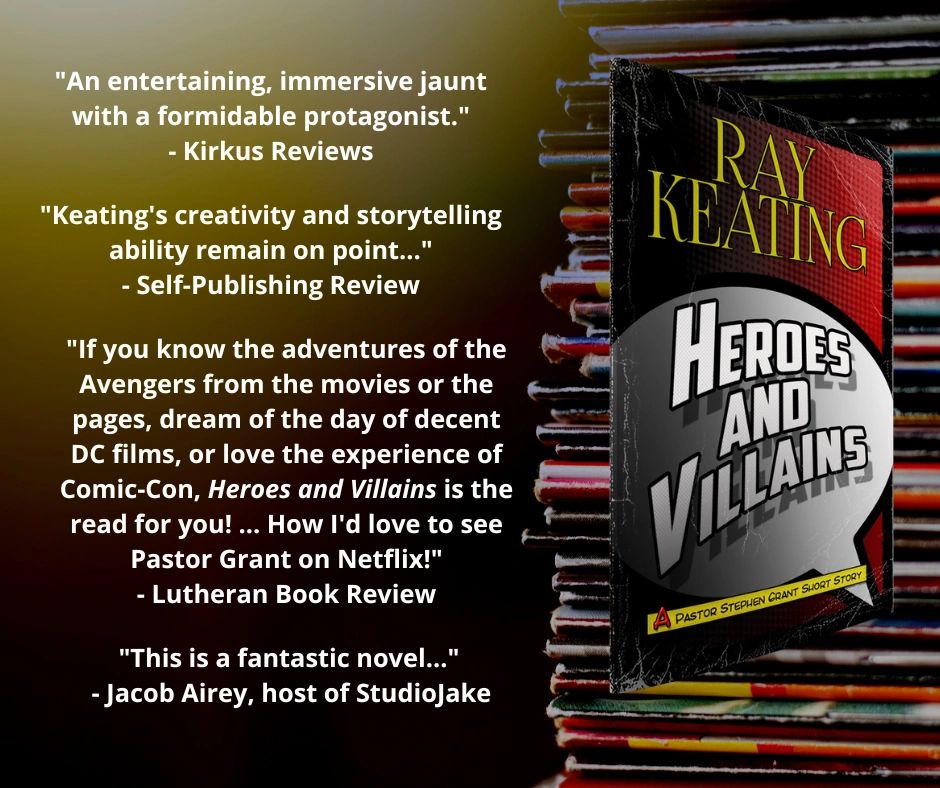 Among the praise for HEROES AND VILLAINS...

"In this short story, Keating's (Reagan Country, 2018, etc.) recurring cleric Stephen Grant steps up to help a popular comic-book creator targeted by armed assailants... When kidnappers eventually abduct someone, Stephen is quickly on their trail, and he has plenty of help--a convention's worth of superheroes. The series' protagonist remains a man of action even though the story isn't novel-length. This relatively short piece is lighter in tone than previous outings, due mainly to its concentration on the cheery setting. Keating respectfully portrays the con as a mostly enjoyable experience... Much of the comedy is appropriate to the setting, as when people assume that the pastors' clerical garments are costumes honoring the real-life comic-book series Preacher. An entertaining, immersive jaunt with a formidable protagonist."  - Kirkus Reviews

"Keating manages to instill the same suspense of his other epic thrillers into this unlikely little gem. As he always does, Pastor Grant brings bravado and humility to the table at the same time, instilling the book with morality, action and thought-provoking revelations from start to finish. Keating's creativity and storytelling ability remain on point, for a fun and different take on Pastor Grant, and one that's just as satisfying as longer books in the series."  - Self-Publishing Review

"An engaging story that not only entertains, but also confronts the sad reality that creators and their work have been tainted by political agenda."  - Tyrel Bramwell, author of The Gift and the Defender

"Heroes and Villains takes you inside all the drama of a comic convention, including that which only Stephen Grant can help with. It's an enjoyable romp complete with the gritty realism of the Burton Batman films, the camp of the Adam West adventures of the 60's, and the modern humor of LEGO Batman. If you know the adventures of the Avengers from the movies or the pages, dream of the day of decent DC films, or love the experience of Comic-Con, Heroes and Villains is the read for you!... DC and Marvel are famous for telling stories of worlds like ours, yet different. This is the 'multiverse.' Somewhere, there is a world like ours where these stories have their own screen adaptations. How I'd love to see Pastor Grant on Netflix!"  - Lutheran Book Review

"This is a fantastic novel... If you are a comic book fan who is fed up with the political correctness that's going on, you have got to pick up Heroes and Villains... I highly recommend this book... I'm definitely going to be paying more attention to Ray Keating, and getting more of his novels."  - Jacob Airey, host of StudioJake

"I have good news for you. I was a little worried that a short story isn't worth buying by itself (although I do think short stories can be a masterful way to highlight good writing). At 83 pages, however, this is much more a novella. I don't begrudge what I spent on it at all. There was enough for a satisfying read and an enjoyable time spent... There are heroes and villains, ideologies & naïvetés. There's a cast of characters many of us have grown fond of and a fun little setting. Good summer reading."  - Mary Moerbe, "Meet, Write, & Salutary" blog

(NOTE: Free shipping only applies in the continental U.S.)