MURDERER’S ROW was named “Book of the Year” by KFUO radio’s “BookTalk,” and it features baseball, terrorism, a string of grisly murders, sordid politics, and a Lutheran pastor who once was a Navy SEAL and CIA operative. 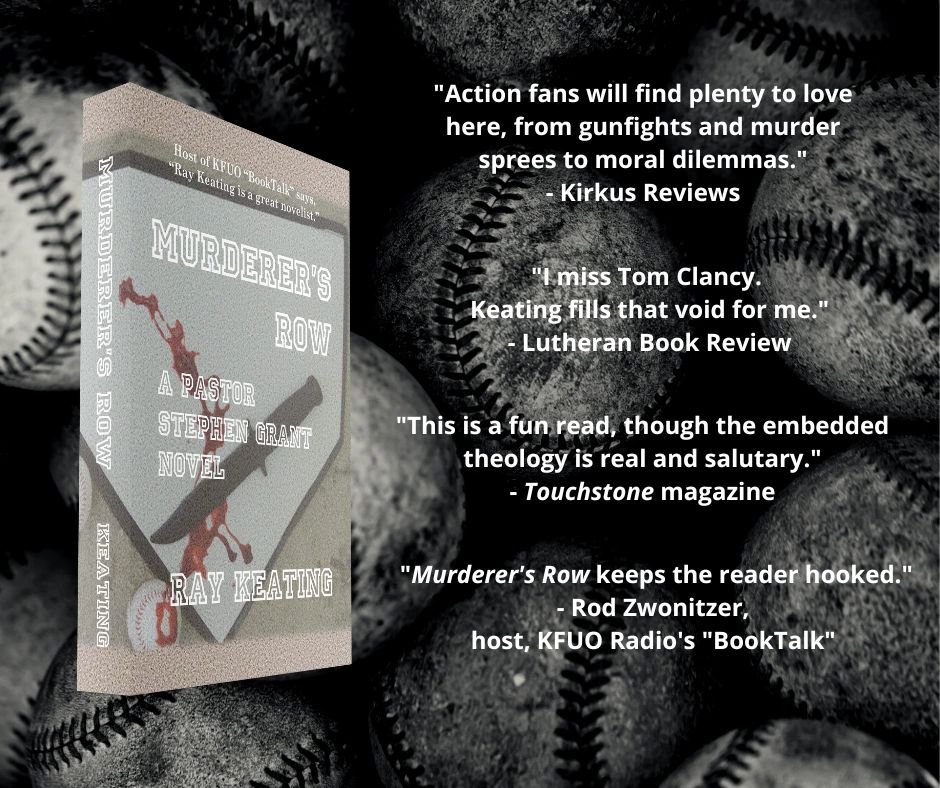 "The author packs a lot into this frantically paced novel... a raft of action sequences and baseball games are thrown into the mix. The multiple villains and twists raise the stakes...  Action fans will find plenty to love here, from gunfights and murder sprees to moral dilemmas."  - Kirkus Reviews

"I miss Tom Clancy. Keating fills that void for me."   - Lutheran Book Review

"This is a fun read, though the embedded theology is real and salutary. There is death and life, adultery and commitment, friendship and betrayal, violence and victory over violence. Keating, an economist and experienced business writer, does extremely well in portraying the politicos and their machinations at all levels of government, as well as the machinations of the news media, of which he is a longtime member. He obviously knows his way around the bases and dugout, too, as does his hero, who becomes a baseball chaplain... One of the charming and welcome aspects of the Pastor Grant series is the mere Christianity that runs throughout. Grant's best friends are a Roman Catholic priest and the rector of an Anglican Church in North America parish. The three meet regularly for prayer and Scripture, golf, mutual chastisement, and socializing (sometimes a few beers). And their families are friends and more... Perhaps the best part of the book for the reviewer is that the clergy are good at helping people bring Christ into their vocations."      - Touchstone magazine

"This novel is a fascinating read with a murder mystery, unique and exceptional characters, and wit... With multiple layers and a complex plot, the novel moves forward with a smooth and even pace."   - SeriousReading.com

"I really enjoyed the baseball references! The complexity of the plot was great. Structure and flow were great. This was just a super pleasing read!"  - Mary Moerbe, author of Blessed: God's Gift of Love and Family Vocation