Could President Ronald Reagan’s influence reach into the former “evil empire”? The media refers to a businessman on the rise as “Russia’s Reagan.” Unfortunately, others seek a return to the old ways, longing for Russia’s former “greatness.” The dispute becomes deadly. Conflict stretches from the Reagan Presidential Library in California to the White House to a Russian Orthodox monastery to the Kremlin. Stephen Grant, pastor at St. Mary’s Lutheran Church on Long Island, a former Navy SEAL and onetime CIA operative, stands at the center of the tumult. He is strengthened by his faith, wife, friends, and former CIA colleagues, and is armed with a Glock and Holy Scripture. Grant is the kind of guy that Reagan would have appreciated. 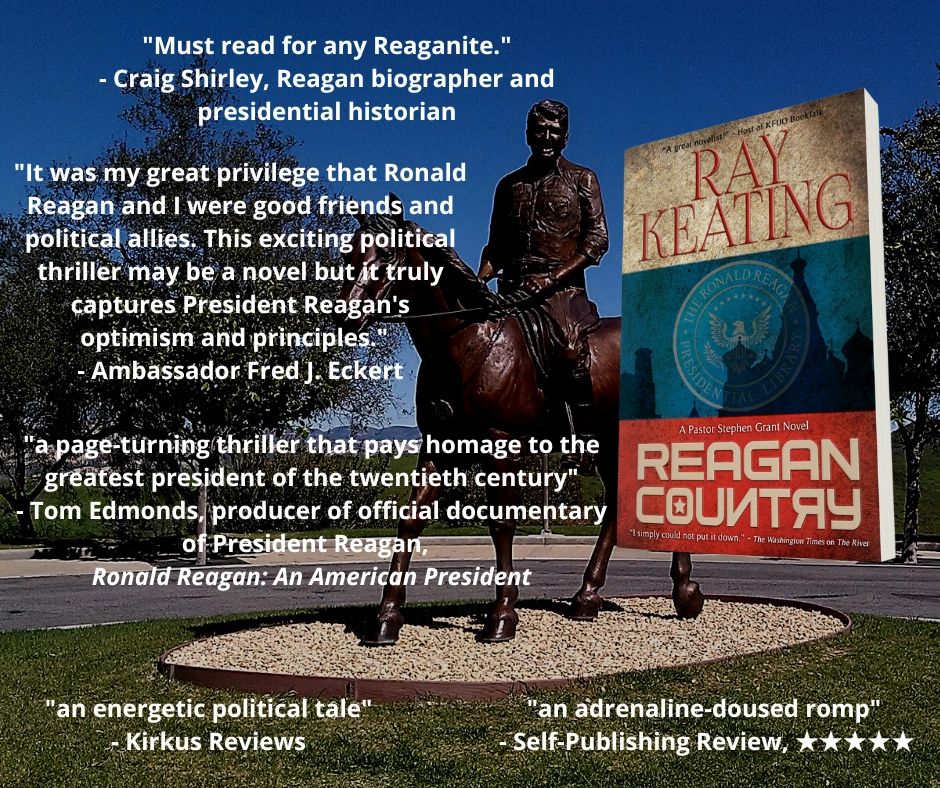 • “Must read for any Reaganite.”   - Craig Shirley, Reagan biographer and presidential historian

• “It was my great privilege that Ronald Reagan and I were good friends and political allies. This exciting political thriller may be a novel but it truly captures President Reagan's optimism and principles.”  - Ambassador Fred J. Eckert

• “If political intrigue and expansive narrative threads fit neatly in your wheelhouse, then the writing of Ray Keating never fails to disappoint… Another deeply researched and action-packed gem from the author. While the details remain cloaked in secrecy for much of the novel - a specialty of Keating's, never giving away too much too soon - the artfully crafted suspense is palpable. If you're a political junkie, this book will not disappoint, but remarkably, REAGAN COUNTRY also works as an adrenaline-doused romp that any suspense lover will struggle to bookmark before the final page.”   - Self-Publishing Review, ★★★★★

• “Keating … has accumulated an impressive assortment of characters in his series, and he gives each of them ample opportunity to shine… Tight action scenes complement the suspense (uncertainty over when the next possible attack will be)… The villains, meanwhile, are just as rich and engrossing as the good guys and gals. The familiar protagonist, along with sensational new and recurring characters, drives an energetic political tale.”   - Kirkus Reviews

• “President Ronald Reagan's legacy will live on in the U.S., around the world and in the pages of history. And now, thanks to Ray Keating's REAGAN COUNTRY, it will live on in the world of fiction. REAGAN COUNTRY ranks as a page-turning thriller that pays homage to the greatest president of the twentieth century.”      - Tom Edmonds, producer of the official documentary of President Reagan,  Ronald Reagan: An American President

• "REAGAN COUNTRY is a story of unexpected adventure. I have come to expect adventure for Rev. Stephen Grant in and beyond St. Mary's Lutheran Church (LCMS), but I did not expect this kind of plot. In an America where a large percentage of college students naively prefer and/or promote socialism over capitalism, 'Russia's Reagan' shows the promise of life, liberty, and the pursuit of happiness for the people who had been oppressed by socialism and communism. If only! ... Reflecting on the series to date, one strength is the knowledge and research of the author. He becomes, if he is not already, a subject matter expert on the topic at hand. Reagan. Comic books. Wine. Baseball. Everything comes off as authentic, accurate, and well-informed. Keating's creativity also avoids the formula of so much fiction in that we are not merely back to the 'status quo' at the end of each installment. He develops characters, relationships, and situations in believable, realistic, human ways. We are primed, wanting more."  - Lutheran Book Review

• "Yet another solid Pastor Stephen Grant novel! ... you'll enjoy the read, tell all your friends to read it, and yearn for the next volume in the PSG series. Keep 'em coming Ray!"  - Rod Zwonitzer, retired host of KFUO's "BookTalk"

• "An exciting read that informs as well as entertains ... with a jaw-dropping climax."  - TopShelf Reviews, ★★★★½

• "Another deeply researched and action-packed gem from the author. While the details remain cloaked in secrecy for much of the novel - a specialty of Keating's, never giving away too much too soon - the artfully crafted suspense is palpable. If you're a political junkie, this book will not disappoint, but remarkably, Reagan Country also works as an adrenaline-doused romp that any suspense lover will struggle to bookmark before the final page."   - Self-Publishing Review, ★★★★★